Husker Du: The Story of the Noise-Pop Pioneers 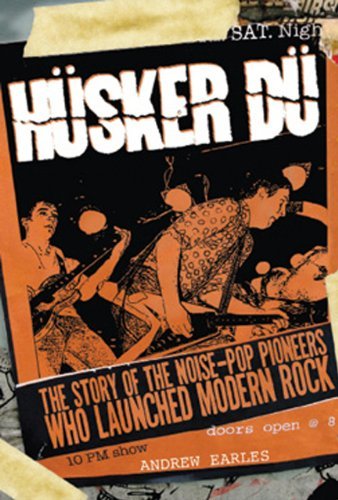 Andrew Earles’ Husker Du biography is the first book to be dedicated to the Minneapolis trio who, between 1982 and 1987, set a high watermark in the development of American underground guitar music.

But to date Husker Du has received a chapter in Michael Azerrad’s defining Our Band Could Be Your Life, passing mention in Gina Arnold’s enjoyable On The Road To Nirvana and that’s been pretty much it as far as far as printed spine-bound coverage of the band goes.

So, to Earles’ fantastic, but flawed book Husker Du: The Story of the Noise-Pop Pioneers Who Launched Modern Rock.

To all intents and purposes it’s a book I’ve been waiting for since 1993 when I bought the Warehouse double album in Bath, spurred on by a growing obsession with Sugar, Husker Du guitarist Bob Mould’s 90s alt rock trio.

Unfortunately I need to tackle the book’s flaws first. Chief among them is that it’s frustratingly incomplete. There’s no personal or even musical background on Bob Mould, drummer Grant Hart or bassist Greg Norton. Many tantalising facts are left hanging in the air rather than being pursued – Norton’s accusations of being, well, somewhat scammed out of money by his band mates being a case in point.

There’s little first-hand information on how the band approached song writing and recording, how that changed as they expanded their musical palate or what two of the three principles (Mould declined to participate*) thought of the contents of their albums.

Making sense of a hardcore punk band whose drummer recorded what can only be described as a show tune (the unreleased piano instrumental from the Zen Arcade sessions, known as ‘Granted’ on some bootlegs) would have illuminated how they differed from their peers.

Elsewhere Earles seems overly ‘embedded’ with Norton and Hart, the latter in particular. So when Hart explains that his The Baby Song is (in intention at least) “a heartfelt tribute” to his newborn son, the author declines to mention that the song itself is a horrible throwaway novelty.

It would also be nice to know whether Hart or Norton ever regretted signing to SST, in view of the still unresolved royalty issues with the legendary California punk record label.

Further more, given that Earles talked to SST’s Joe Carducci, some information on the status of Husker Du’s back catalogue – which is crying out for a responsible remastering/reissue programme – should surely have been in order.

My final gripe is partly due to my day job. I proofread and subedit other peoples’ copy every day (whether you’d know this from the state of this blog is, frankly, besides the point). So Earles’ errors in terms of spelling (notably referring to the bassist as Horton), grammar, repetition and non-sequiters jar more than a little.

Also, more could be made of the unwieldy ‘noise pop pioneers’ title the book bestows upon them. Perhaps follow a line of thought that runs: the Pixies’ advertised for a bassist into Husker Du and Peter, Paul and Mary, with Smells Like Teen Spirit Nirvana’s Kurt Cobain was trying to write a Pixies rip-off, and Nirvana are without a doubt a band that changed the course of modern rock music.

Now the good. First off, it’s a book about Husker Du. For all the complaining above, that’s perhaps all you need to know (it was certainly all I needed to know).

It provides a unique look at the band and does a good job of explaining what made them trail blazers.

It’s the first time I’ve read that much of what Greg Norton has to say, and there’s a lot of material, stories and perspectives I’d not heard from throughout their career.

The book also inspired me to dig out recordings of band’s earlier shows and unreleased tracks from the box at the bottom of Son1’s wardrobe, where they’ve languished for too long.

And as for the flaws, as Earles candidly notes in his introduction: “It comes from the right place.”

Or, if he’d quoted Minor Threat: You tell me that I make no difference/At least I’m f*****’ trying/What the f*** have you done?

Disclaimer: I am, as you may have guessed, a bit of a fan of Husker Du. I have everything they’ve released, and have played most of it to death, and for a long time my proudest online mention was a name-check on Paul Hilcoff’s site. There’s also the small matter of my blog being named after a line in a Bob Mould song.

*Bob Mould’s autobiography See A Little Light: Tales Of Melody And Rage is due out in June this year

2 responses to “Husker Du: The Story of the Noise-Pop Pioneers”