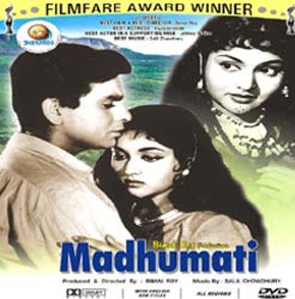 Memories of the frankly dull supernatural film Mahal were still fresh in mind when I watched Madhumati. Although it too was billed as a ghost story, I needn’t have worried.

Despite one “I’m sure I’ve been here before” style flashback and one ghostly appearance, Madhumati concentrates on familiar filmi territory rather than spurious supernatural shocks.