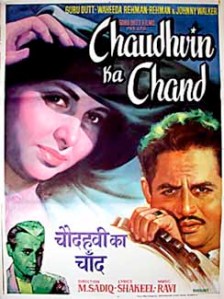 There’s something soulful about Guru Dutt. Chaudhvin Ka Chand, or Full Moon as it appears on Imdb.com, is the third of his films I’ve seen and in each one the actor brings an intensity, but also a sense of sadness, to his characters – even in a fun and frothy film like Mr & Mrs ’55.

In this he stands out from other legends of early Hindi cinema like Raj Kapoor, with his Chaplinesque energy, or, particularly in his early films, the matinee idol presence of Dilip Kumar.

This intensity of Dutt’s is evident in Chaudhvin Ka Chand – and not just because of the internal conversations he has with himself towards the end. END_OF_DOCUMENT_TOKEN_TO_BE_REPLACED

Pyaasa is justly lauded as a masterpiece of 1950s India cinema. It’s a fantastic film whose melancholy twists and turns make for a refreshingly individual film.

Written, produced, directed and staring Guru Dutt, the 1957 film was his follow-up to the commercial success that was Mr & Mrs ’55 and he used the rewards from that film to make a darker counterpart.